Fruits That Start With Q

Quick! Think about a fruit that starts with Q. It’s a bit tough, right? This may surprise you, but there are actually many fruits beginning with the letter q. It is likely that you have eaten some of these fruits, but maybe weren’t aware of their names.

From local fruits to international fruits, here is a list of all the fruits that start with q.

Though they look similar, they don’t taste anything alike! The juicy queen anne cherry fruit is much more sour in flavor. Their sour flavor lends them to be a great cherry for producing maraschino cherries!

Queen Anne cherries are harvested in Michigan and Oregon. Unlike some other fruits on this list, these cherries are a highly seasonal fruit and only grow in the summer months. It makes for a great fresh snack or can be used in baking.

These fruits that start with q are more commonly called chupa-chupa, and are a type of South American sapote. The tropical fruits beginning with q grow in the Amazons along Brazil, Colombia, and other northern countries in South America.

The quararibea cordata fruit has a hard greenish-brown shell that opens up to a fibrous orange pulp. The pulp has a sweet flavor and is eaten raw as a healthy snack. Because it’s so fibrous, it can’t be used in many other applications.

If you want to try quararibea cordata fruit, then you can find them in tropical regions from February to May. 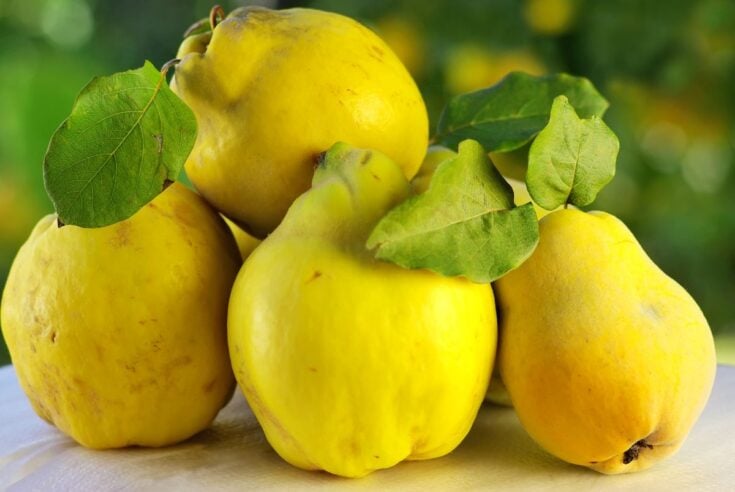 Looking at a quince fruit may seem a bit confusing at first. It looks like a hybrid of a golden delicious apple and a pear, but it’s neither. These uniquely shaped yellow fruits grow on the quince fruit tree native throughout Central America.

Even though the quince fruit looks like an apple or pear, their texture and flavor is different. When raw, quince fruit is tough and has a bitter taste, so it is not often eaten fresh.

One thing quinces are well known for is their strong aroma. Quince smells flowery and musky, and its smell will take over the room. Many compare the smell of quince to that of guavas and apples.

The best way to enjoy the fall fruit is by cooking it. These fruits that start with q have lots of pectin in it, so it works best to make jams and marmalades. Check out this quince chutney!

One fun fact about quince is that it’s actually pronounced “kwins,” even though it’s spelled the same as the number 15 in Spanish.

Sometimes called the desert quandong or the native peach, quandong is a sweet fruit that grows in parts of Australia.

The small, round red fruit has a thin peach-like flesh with a large walnut-like seed in the middle. Quandong fruit has been used in indigenous cuisine for a long time.

These fruits that start with q are said to taste similar to rhubarb, and are often enjoyed fresh or as a seasoning in foods.

They grow around the months of October to March, and have lots of nutrients which make them a great aussie superfood. 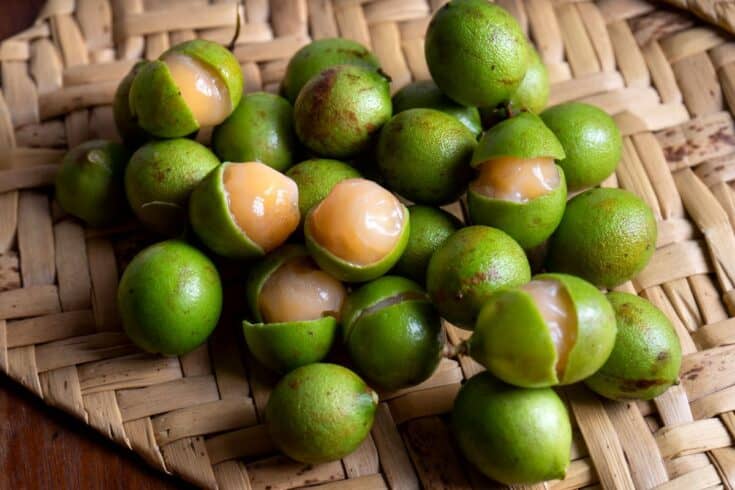 Quenepa fruit, often called spanish lime, is a South American fruit that grows during the dry season. The stone fruit looks like a lime at first, but the inside looks quite different.

Quenepa fruit has a thin green peel that is inedible. Inside is a large seed that is covered in an orange, juicy flesh that has a texture akin to green grapes. The flavor of quenepa fruit, or mamoncillo, can best be described as a mix of sour and sweet (but more sour).

Many people enjoy eating the fruit by hand, but these fruits that start with q can be used to make alcohol, soft drinks, or other beverages.

If you love strawberries, this variety is one to add to your must-try list. Quinault strawberries were created by Washington State University, and have quickly become a popular berry along the Pacific Northwest of the United States.

Their popularity stems from their lovely flavor. The sweet fruit is large in size and has a soft, juicy texture.

Many home gardeners like to grow quinault strawberries in their home, because they can resist diseases well. They’re an ideal choice for gardeners looking for potted everbearing strawberries.

Though quinault strawberries taste delicious raw, they are great for making preserves as well. The two main harvesting seasons for these fruits that start with q are during Spring and Autumn.

The fruits starting with the letter p look a lot like the pineapples that are sold in your local grocery store, but they’re not the same.

The Queen Tahiti pineapple grows from the late spring until summer in Tahiti, while most pineapples sold in the US are cayenne pineapples.

Queen Tahiti pineapples have a long shape, and have a more oval shape compared to cayenne pineapples. They have the classic spiky greenish-yellow skin, and juicy bright yellow flesh.

The flavor of a Queen Tahiti pineapple has more floral and perfume-like flavor notes compared to your typical sweet pineapple, but they’re just as juicy.

Many Tahitians enjoy this fruit as a great snack, but it can also be used in the same ways as cayenne pineapples. This includes grilling, juicing, or turning them into sorbets! 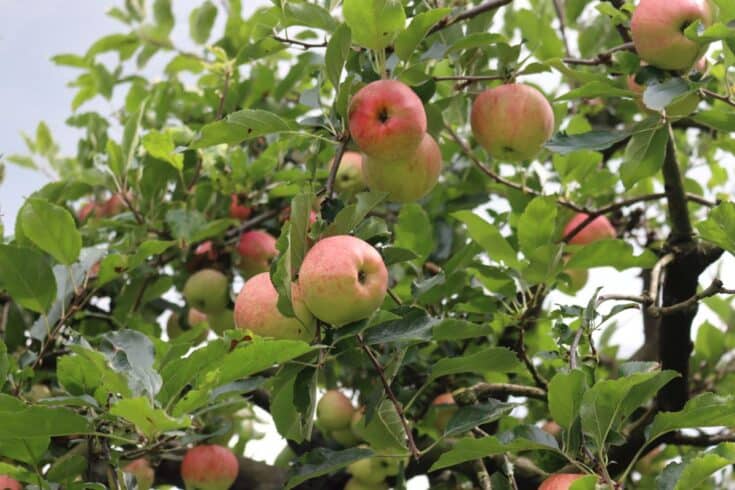 Querina apples, or Florina apples, are a variety of apples that originated in France. These fruits starting with the letter q are quite large and have a thin reddish-yellow skin. The inside of the querina apple is white, crisp, and quite juicy.

This apple has characteristics of many different apple types, but are part of the same family as the Golden Delicious and Rome varieties of apples. It is not well known if these fruits are a natural hybrid, or if they were cross-bred that way. They’re a very old fruit!

Their sweet flavor makes it a fun fruit to eat raw, but they are especially good for baking an apple crumble! The best time to find querina apples is in the fall season. 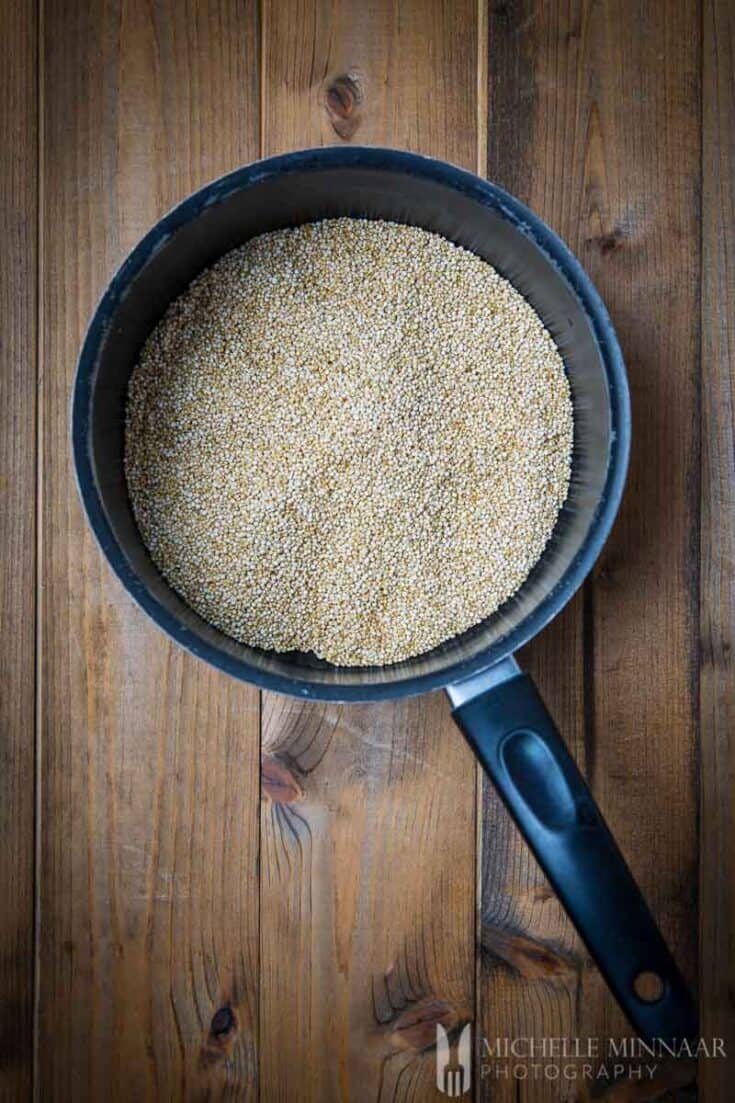 Quinoa? Yes! Quinoa is technically a fruit, even though it is commonly used as a grain. Originating around the Andes mountains, quinoa has been a staple in many South American dishes.

This delicious food can be used in both sweet and savory applications. Though many in the US use quinoa as a substitute for rice, it is usually used to make porridge or soups. You can use it in salad too! Sometimes the quinoa is ground into a flour to make other goods.

Quinoa is a hard, small, beige or dark red fruit that needs to be soaked before cooking. It cannot be eaten without cooking! Once quinoa is cooked, it takes on a wonderfully fluffy texture.

It does not have much of a taste alone, and often needs seasonings to give it a taste. The peak season for these q fruits are during the end of fall and start of winter. These surprising fruits beginning with the letter q truly thrive in colder weathe

The Queen Apple is a variety of fruit that comes from New Zealand, and grows from the spring to early fall. This is quite a long harvesting time, which is why the queen apple is so commonly used within the country.

These fruits starting with the letter q are a natural hybrid between royal gala apple and the Slendour genus. They do not have an overly sweet flavor, but are nice and crisp, so they are perfect for adding to salads.

The queen apple has a nice dark red skin color with a hint of yellow at the top. These q fruits can also be juiced, but they may not produce as much juice as some of the fruits on this list.

More commonly called Forelle, the Queen Forelle pear is part of the pear family and grows mostly in Chile and the US.

Compared to other pears, Queen Forelle is smaller in size but it has fantastically juicy flesh. Its texture is a bit grainy, but its flavor is sugary with a hint of tanginess. Most people enjoy the pear raw, but it can add a lot of flavor to savory dishes or desserts.

The Queen Forelle pear has a gorgeous green color with patches of blush red. Once cut open, it has a pale white flesh and a few inedible seeds in the middle.

The best time to enjoy a Queen Forelle pear depends on where they grow. If harvested in Chile, its peak season is from March to August, while America’s season is from October to January.

Did you enjoy this post? What other letters should we explore? Let us know in the comments!