Fruits That Start With L

Lemons, limes, lychee…and what else? There are many more fruits that start with L than just these three fruits. Some are common fruits grown in the US, while others are rare fruits that grow in the tropics.

Read on to discover more fruits starting with the letter L.

Commonly known as pink lady apples, the Lady apple fruit is a classic American apple. It has streaks of green and red on its skin, and the inside is a lovely pale color.

Lady apple has a tender bite, with a subtly sweet flavor. These days lady apples are often eaten cooked rather than eaten raw. They pair well with recipes that involve lamb or pork.

Lady apples grow predominantly in the US during the fall season.

At first glance, lablab fruit looks like a purple Egyptian kidney bean pod. This purple pod holds a row of green beans that are most often used in cooking.

When cooked, lablab fruit has a soft texture and tastes like beans. They grow during the summer throughout Africa and India, so it’s common to find lablab cooked into local dishes. These fruits that start with l are more commonly used as a vegetable.

Lemon aspen is one of the more unique looking citrus fruits that start with l on this list. The pale yellow fruit kind of looks like a lemon, but when it’s cut open, it has more of a star-shape.

Its flesh is just as pale, and has a squishy texture. You can find lemon aspen growing in Queensland, Australia during summer and fall months.

It is often used in traditional medicines, in cooking, and as a garnish. The acidic fruit taste similar to regular lemons, but lemon aspen have notes of grapefruit as well.

This rare Chilean fruit is a rare edible fruit that grows from the lardizabala tree called coguil.

Lardizabala has a gorgeous smooth purple skin that protects the jelly-like flesh. There are lots of seeds in the lardizabala, but they are edible. They are widely grown from beautiful flowers that are native to the region.

With its sweet taste, lardizabala fruit can be enjoyed raw or cooked. When shopping in Chile, it’s more common to find just the extracted pulp of the summer fruit rather than the whole fruit. 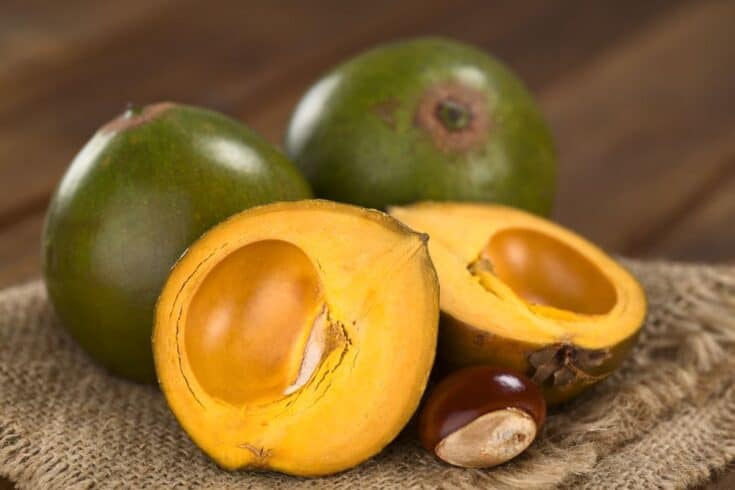 Another set of fruits that start with l from Chile, lucuma fruit grows in tropical regions of Chile and Peru. This delicious green ish fruit looks a lot like a sweet potato once cut open.

Its flesh is dense, starchy, and has a bright orange color like that of an egg yolk. Lucuma fruit can be eaten raw, but most locals prefer the tropical fruit mixed into smoothies or other sweet treats.

A bite of lucuma tastes kind of like custard. These edible fruits grow throughout the summer, so it’s an awesome way to cool down from the hot heat! 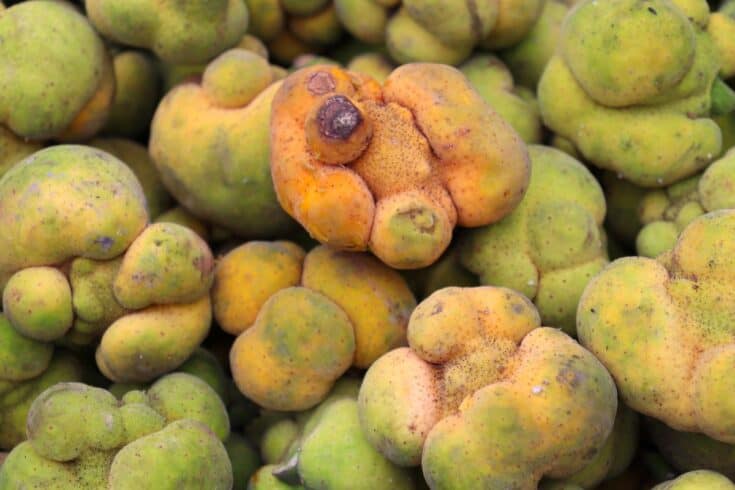 These fruits that start with L have a rough greenish brown outer shell. The shell protects a fibrous gold colored flesh that is similar to durian or jackfruit.

It may not be a citrus fruit, but it has some sweet citrus flavors that are reminiscent of kiwis. Lakoocha fruit is sometimes eaten raw, but it’s more often found in curries.

The small Lapsi fruit grows throughout Asia from October to January. It is sometimes called Nepali hog plum, because it looks like an oval-shaped plum.

Lapsi has a green and yellow skin, with a yellow flesh. Its texture is similar to a plum, but lapsi fruits are much more sour in flavor.

These fruits that start with L are more commonly used in making pickles and candies than eaten fresh. 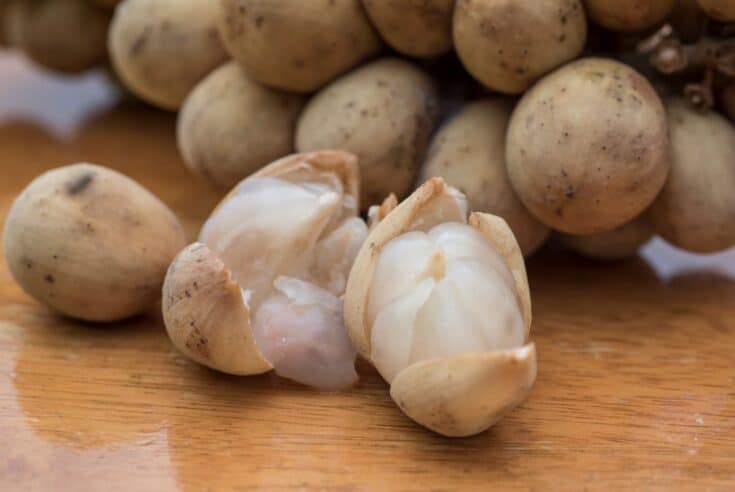 Langsat are popular fruits in Malaysia that are similar to lychee. The small round fruit has a pale yellow-ish skin that is peeled to reveal a squishy white flesh.

Its flavor is kind of like a mix between lychee and pomelo, so it’s sweet and tangy. Langsat fruit is mostly enjoyed fresh during the summer months. These sweet tart fruits are a great refreshing dessert for the hot weather.

Try to find langsat fruit at local markets in Malaysia and the Philippines on your next trip! 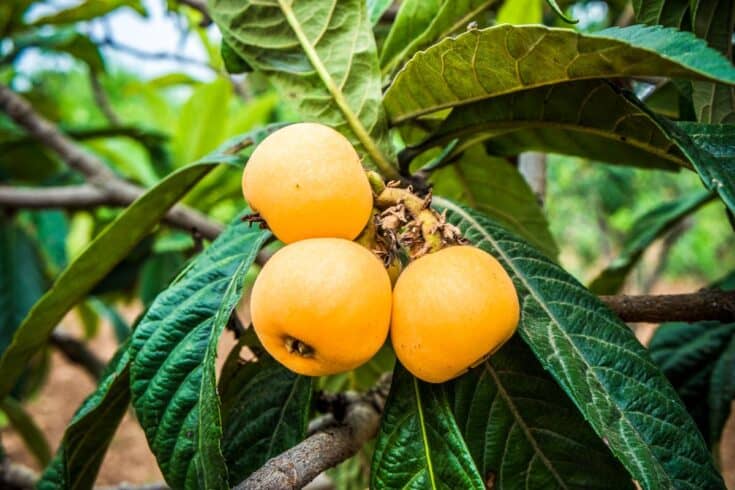 Growing in China and Japan, loquat fruit is an orange fruit that grows during the spring. It has a round shape with a sweet and tart taste.

The skin of loquat fruits are a bit tough, but they are an edible fruit. Its flesh is a lovely light orange color, and has a juicy and relatively firm texture.

Loquat fruit is enjoyed fresh as a healthy snack, but the leaves of loquat are also used to make herbal teas. 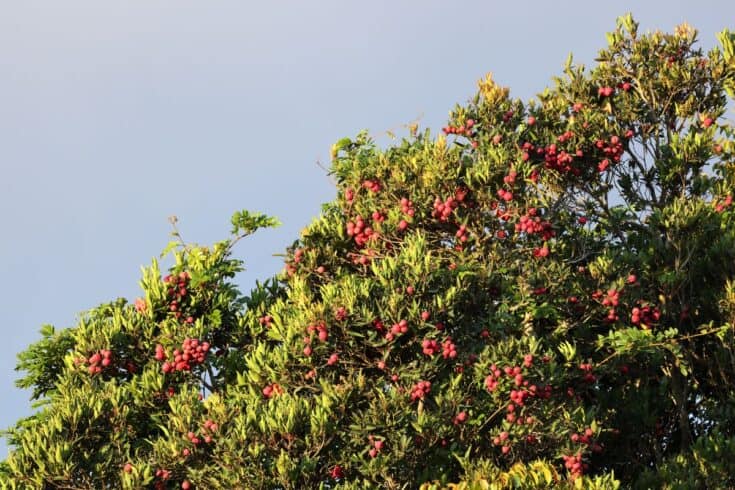 Lilly pilly fruit is a gorgeous purple edible berry that grows in the rainforests of Australia and southeast Asia.

The pea-sized berry grows in the fall and winter throughout the Southern Hemisphere, and has a hard texture.

Lilly pilly fruit may look nice, but it has a musky and spicy taste that isn’t very palatable. It’s more commonly used in chutneys or jellies. 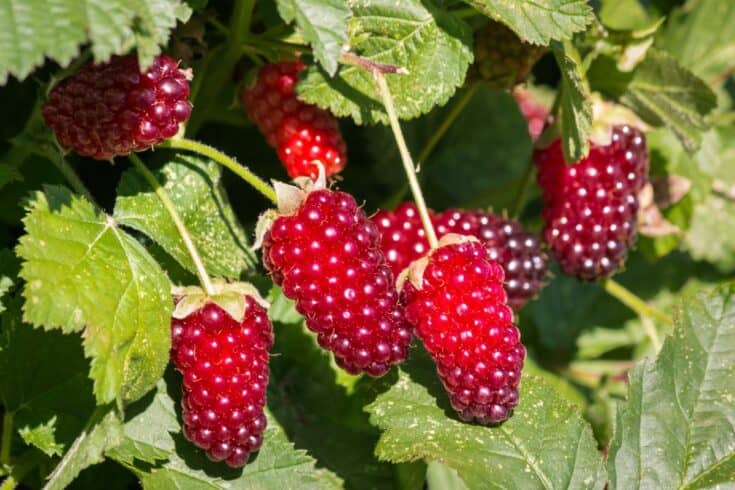 Loganberry fruit was an accidental hybrid fruit made from blackberries and raspberries. It looks like a long blackberry, but has a nice dark red color.

They have a firm, but juicy texture and are best suited for berry jams. You will typically find loganberry fruit along America’s west coast during the summer and fall season.

One of the most popular fruits that start with L are probably lychee fruits. Because of its smooth red shell, lychees are also known as “Chinese strawberries.”

Grown in southeast Asia, lychees have a white sweet flesh that has a texture similar to grapes. These yummy fruits are best eaten fresh during their peak season in the summer.

Liberty apple is a type of apple that comes from New York. With its crisp texture and sweet taste, liberty apple is popular for making apple juice and applesauce.

The medium-sized apple grows during the fall, and has a beautifully dark red skin color. Liberty apple is more common in the east coast of the USA, but you may find it in other parts of America.

Which fruits that start with l do you hope to try? Let us know in the comments!