Whether you’re following a plant-based diet, trying to eat less meat or cooking for vegan friends and family, we’ve got you covered for every meal of the day! It’s no easy feat to find tasty recipes that are completely plant-based, easy to make and slimming friendly too.

The good news is that we enjoy a challenge, and we love making food that everyone can eat! We’ve created lots of recipes that are 100% vegan, or easy to make vegan-friendly with just a couple of simple substitutions.

Starting the day off on the right foot doesn’t have to have to mean a plateful of sausages, bacon and eggs. A vegan breakfast option can be just as filling and nutritious, and often lower in calories too.

This Marmite Mushrooms on Toast ticks all the boxes for a hearty, healthy breakfast. Even if you don’t usually like Marmite, this might just be the recipe that changes your mind! It melts into the creamy sauce until you’re left with a deliciously savoury flavour that’s mild on the Marmite and irresistibly moreish.

To make this recipe vegan all you have to do is switch out the cream cheese for a dairy-free version. It’s super quick and easy to make – no one wants too much fuss first thing in the morning! 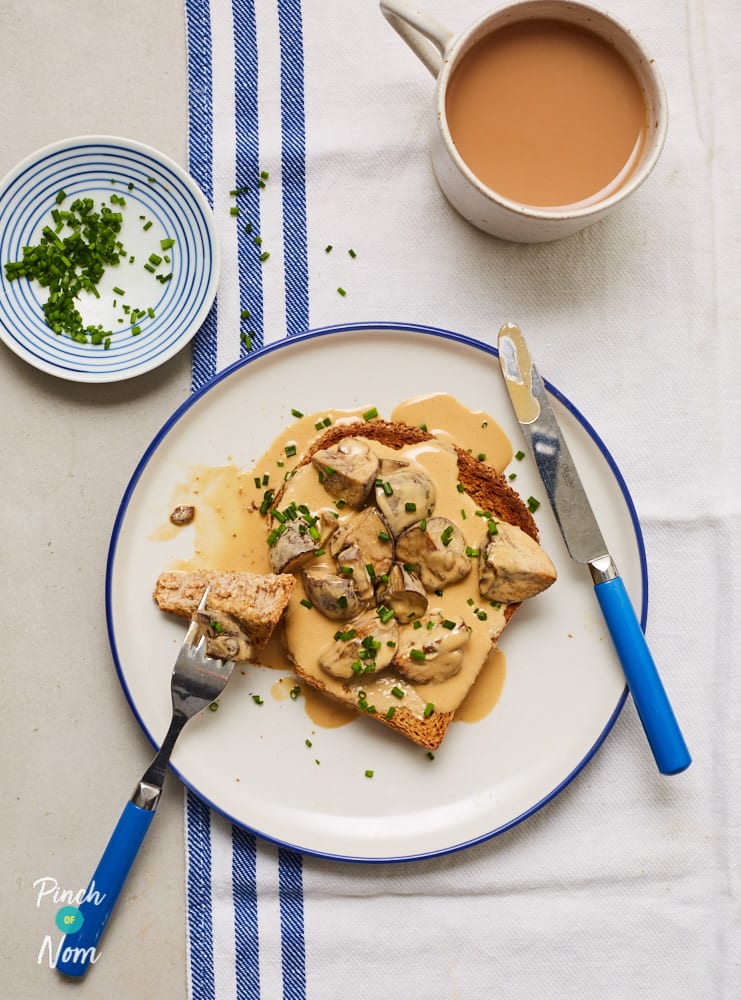 You can’t go wrong with a big bowl of porridge to start the day. Oats are full of slow-release energy that fills you up and fuels you for hours. This Coconut, Banana and Maple Porridge is filling, comforting and completely vegan-friendly.

Even if you’re not vegan, we love the flavour that comes from using dairy-free coconut milk. Paired with some dessicated coconut for extra texture and with a little maple syrup to sweeten the deal, this is a 269 calorie bowlful of tasty goodness. 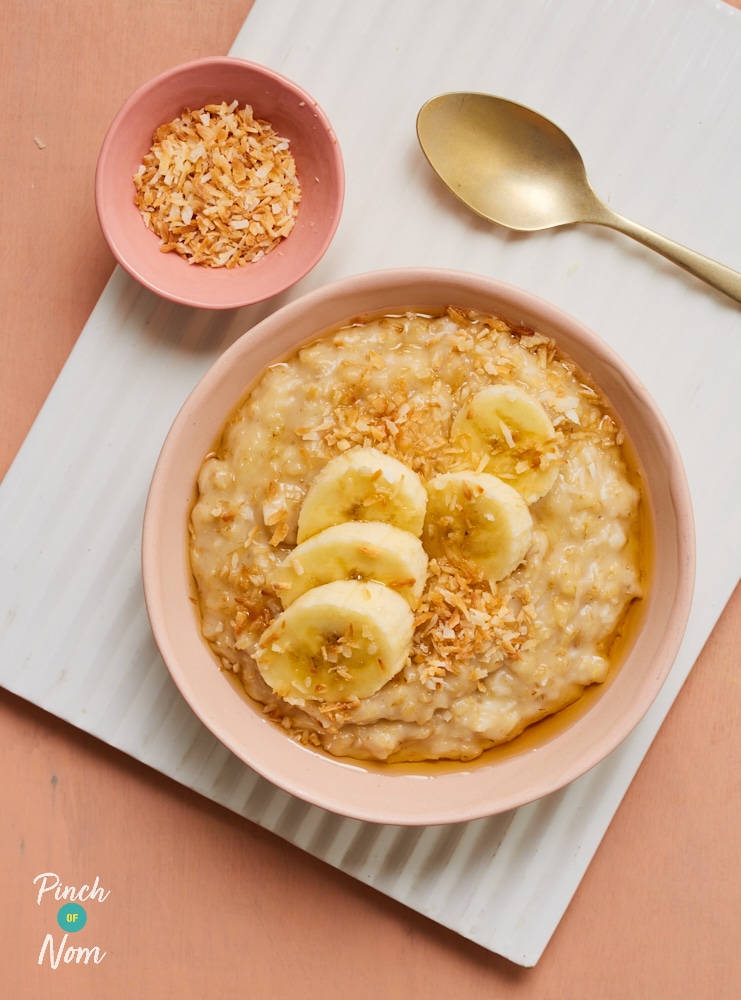 You can’t ever get bored of porridge when there are so many different toppings and flavour combinations to try. This Apple Pie Porridge basically means you can have dessert for breakfast, with all the warming, cinnamon flavour you get from the cosy pastry treat.

We make ours with oat milk and sweeten it with honey, but you can swap out the honey for maple syrup or agave syrup to make this recipe vegan. 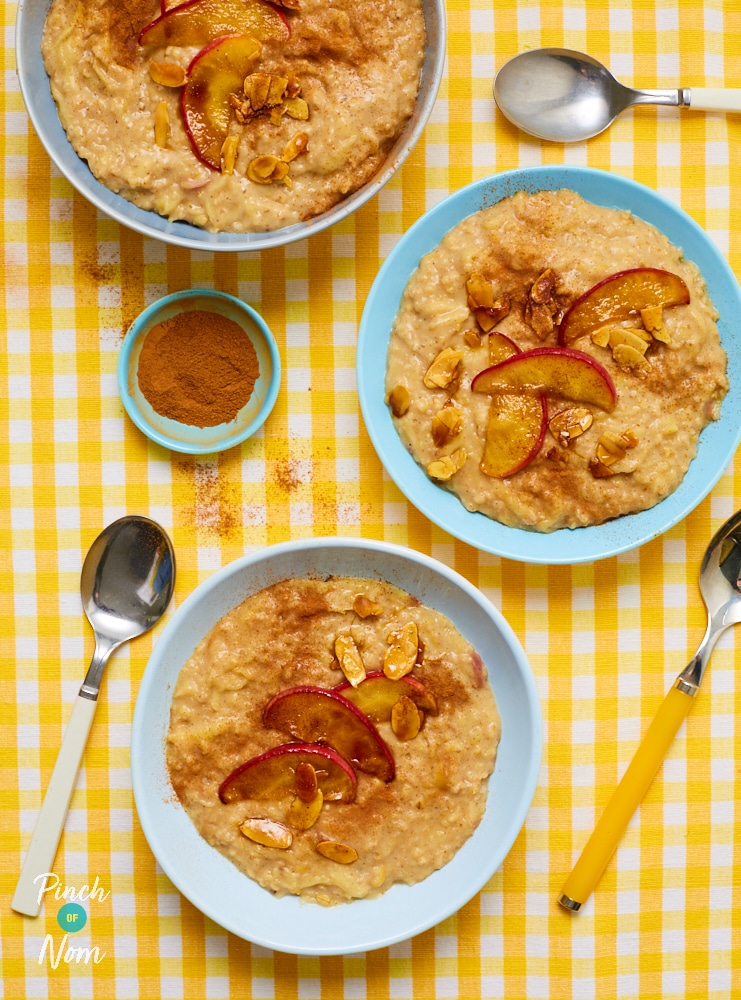 When midday rolls around, you’ll need something quick and healthy to keep you going until dinner. Eating a vegan lunch doesn’t have to mean sticking to the same sandwiches and salads day after day; we have so many plant-based recipes that are packed with flavour and don’t take long to rustle up in the middle of the day.

It’s hard to beat the fresh flavours in this Salad Grain Bowl. Thanks to the addition of quinoa and lentils, it packs a punch of protein, as well as being full of colourful, crunchy vegetables. On the table in just 15 minutes, this is so filling yet light enough for lunch. We can’t get enough of the homemade chilli and lime dressing – it’s the perfect finishing touch, giving the salad a zingy, zesty lift that’s just what you need to set you up for the afternoon ahead. 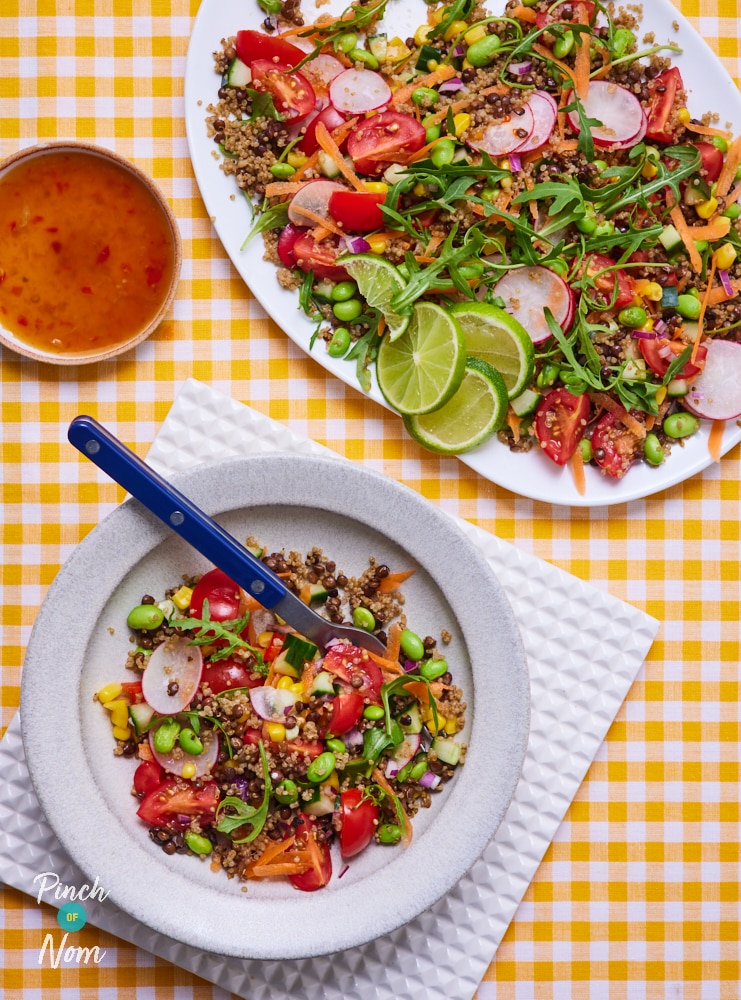 Fancy something a little bit different for lunch? Believe it or not, these homemade Vegetable Tarts are ready in under half an hour. Unlike the high-calorie pastries that you can get at the supermarket or bakery, our recipe comes in at just 252 calories.

The trick is switching from a pastry base to a tortilla wrap! Once it’s filled with your tomatoey vegetables and baked in the oven, it’ll turn out every bit as golden and crunchy. Served on their own or with a little side salad, these are ideal for a quick, tasty lunch that’ll get you on your way to your 5-a-day. 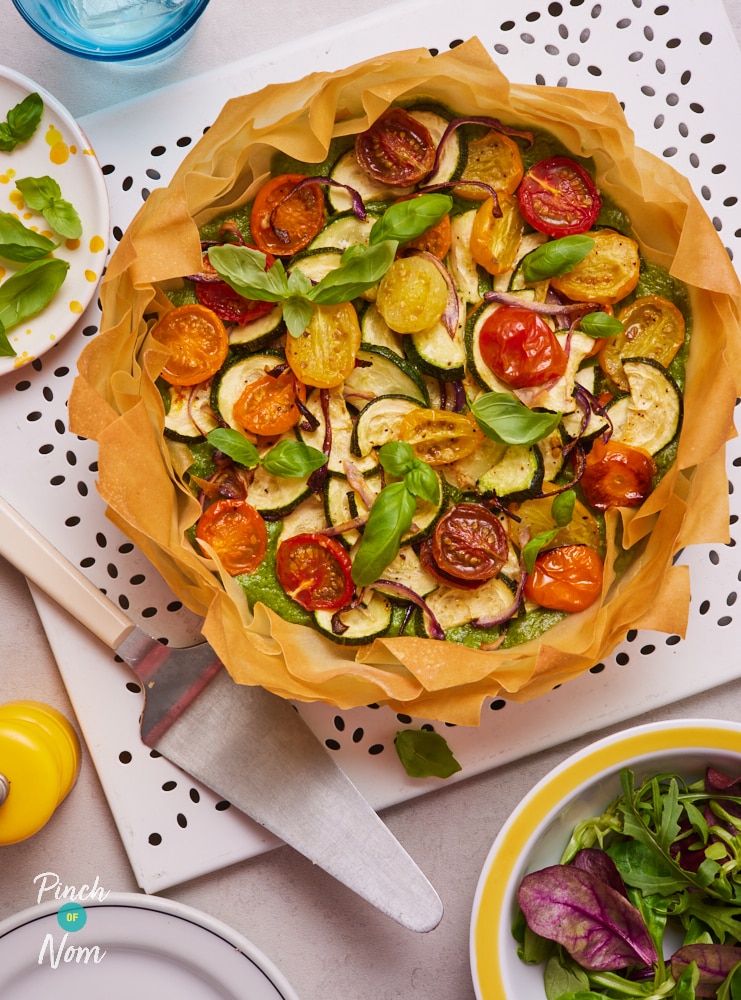 For anyone after a light lunch, soup is always a winning option. While many soups can be thickened with cream or bulked out with ham or chicken, our Spicy Tomato Soup is completely vegan (as long as you’re using Henderson’s relish instead of Worcestershire sauce).

You can make this recipe from scratch in just 25 minutes, but it’s perfect for batch cooking too – why not double your ingredients and stock up the fridge and freezer so there’s always a portion waiting for you at home? Remember that you can add as much or as little Tabasco sauce as you like – it’s up to you how spicy you make this soup! 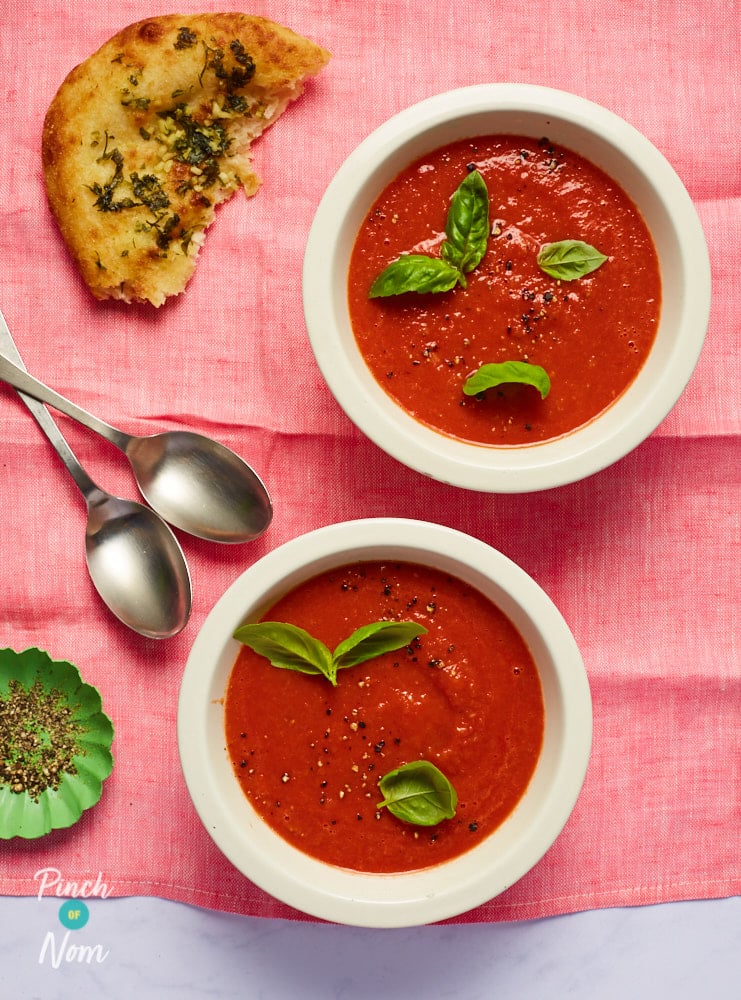 After a long day you’ll want a dinner that you look forward to coming home to. Proving that eating a plant-based diet doesn’t have to be limiting in any way, we’ve got plenty of vegan recipes that you’ll want to add into your weekly meal plan.

This Vegan Chilli is a classic midweek meal. Packed to the brim with fresh vegetables, it’s just as warming and hearty as a meaty version. Pretty much anything goes with this recipe, so it’s ideal if you’ve got a fridge full of vegetables that need using up.

Don’t skip the Marmite! Even if you don’t normally like the flavour, it adds a real richness to this dish, and we promise you’d never know it was there (but you’ll miss it if you leave it out!). At just 305 calories per serving, you can add a scoop of fluffy boiled rice or some potato wedges to turn this into a seriously satisfying evening meal. 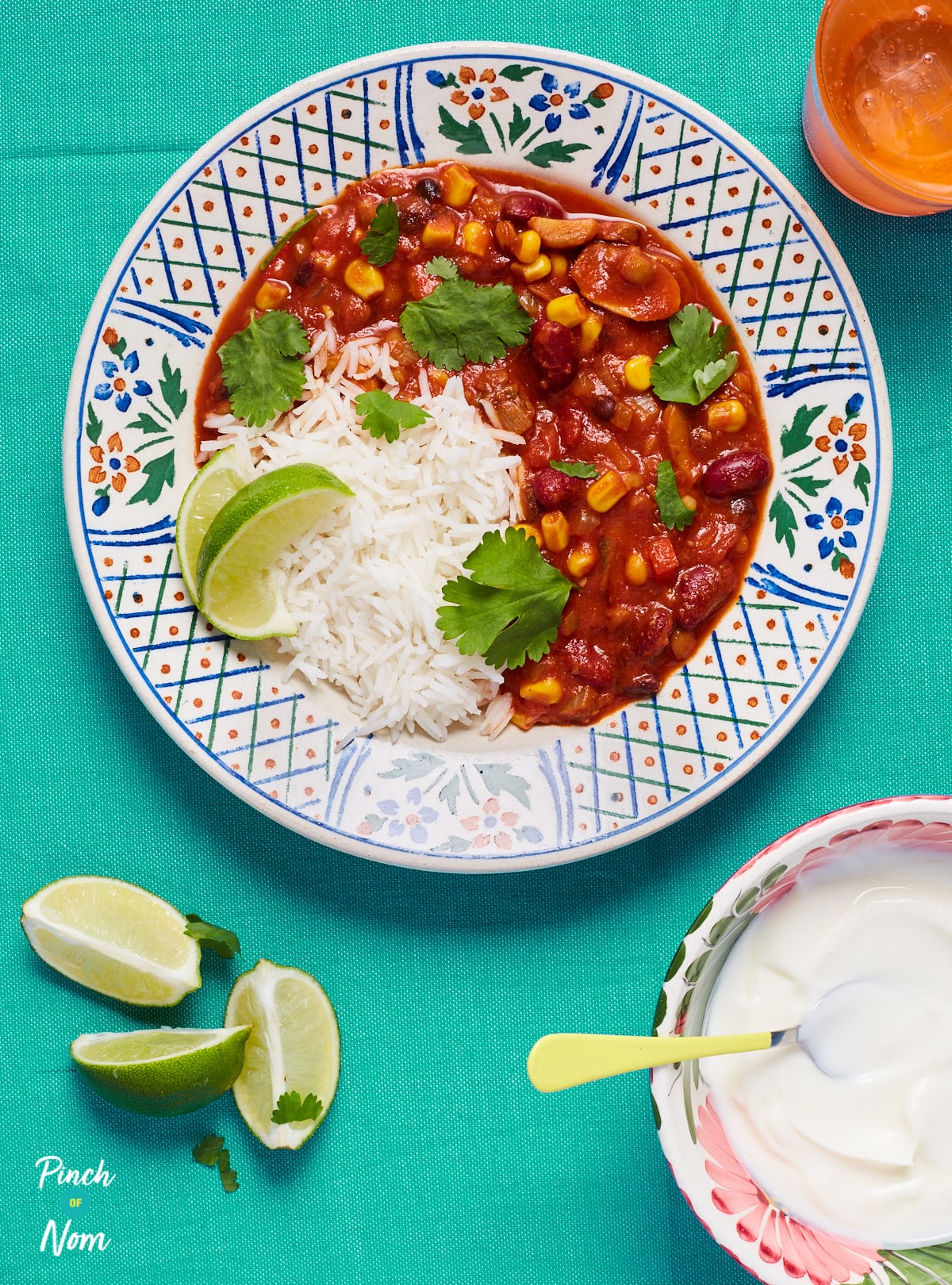 Even if you’re not vegan, this Mushroom Bolognese makes for a welcome change to the usual beef mince version. You’ll want to chop your veggies really finely to give this recipe the right kind of texture – or pop them in a food processor to blitz them in a fraction of the time.

Along with a delicious flavour, swapping meat for mushrooms also makes this recipe super low in calories (only 119 per portion!). Swirl on some spaghetti or pile up your favourite pasta shapes and that’s dinner sorted. 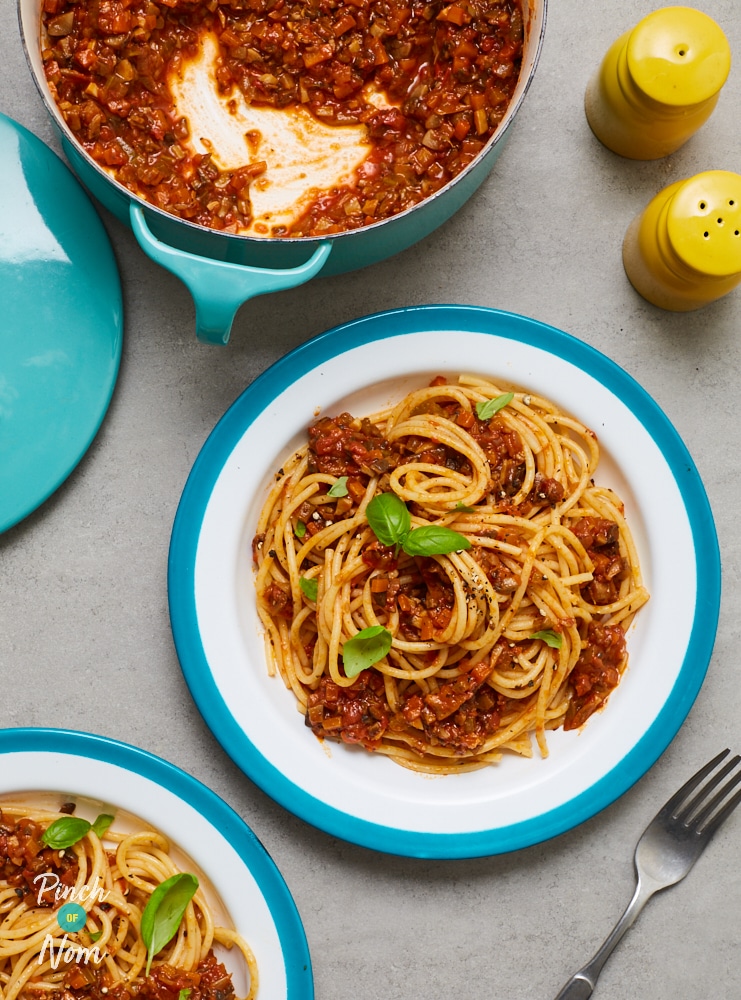 Looking for a vegan dinner recipe that you can make in your slow cooker? Look no further than our Vegan Campfire Stew. Instead of the pork that we use in the non-vegan version of this recipe, we’re using jackfruit as the basis of the hearty casserole.

If you’ve not come across jackfruit before, it’s a tropical fruit with a stringy flesh that’s often used as a meat substitute in vegan and vegetarian dishes. Don’t be put off by thinking that it’ll have a fruity flavour – the jackfruit soaks up all the delicious savoury flavours of the other stew ingredients. 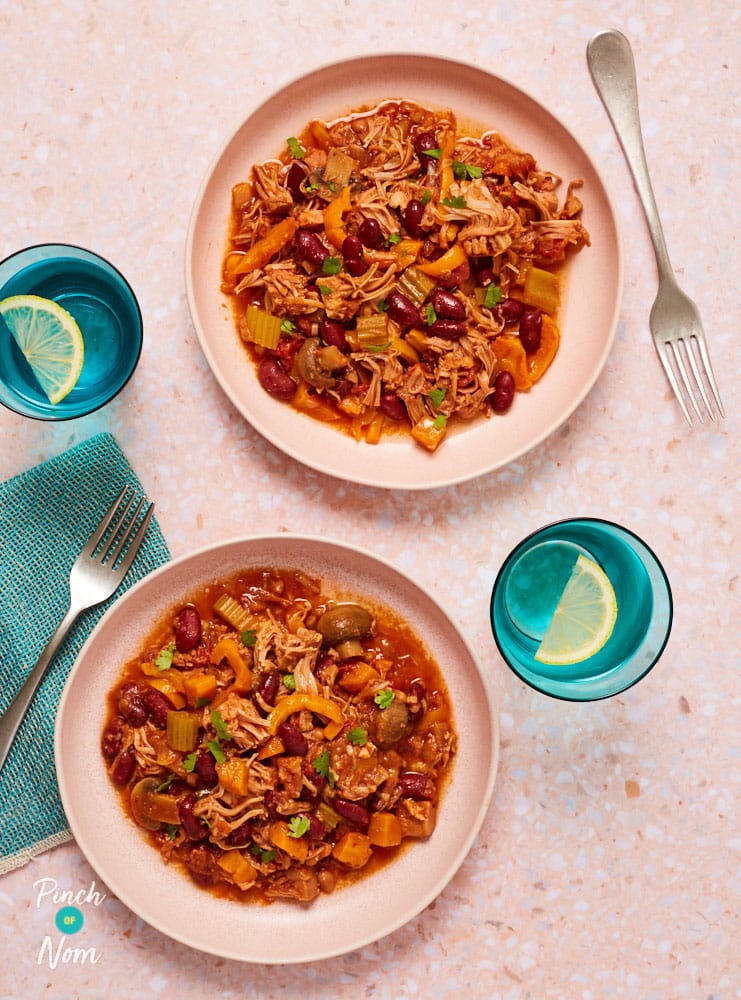 While many dessert recipes rely on eggs, butter, cream and other dairy ingredients, we firmly believe that nobody should have to miss out on pudding! Some of our favourite sweet treats use only plant-based ingredients, creating vegan desserts that everybody will love.

You’ll find it hard to believe that this indulgent-tasting Biscoff Swirl Ice Cream only needs 3 ingredients (and none of them are cream). Vegan ice cream from the supermarket can be pretty pricey, but why pay for it when you can make your own with a couple of bananas, a scoop of Biscoff spread and a few Lotus biscuits?

Once you taste this deliciously creamy frozen treat, you’ll want to make sure you have a tub of it hidden away at the back of the freezer at all times! 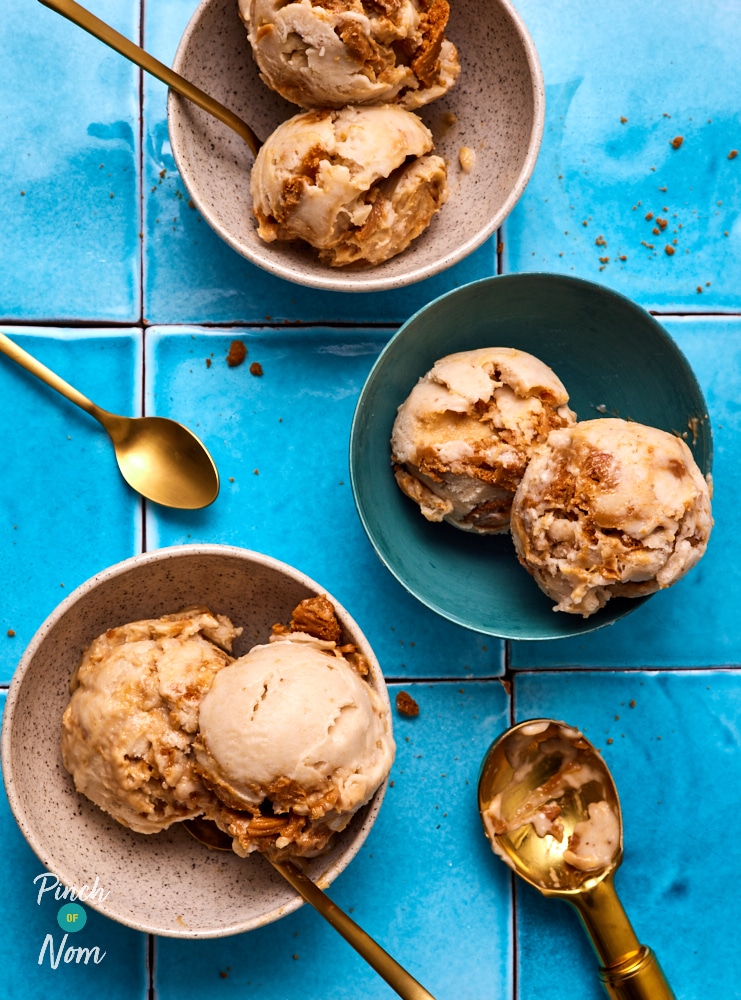 These days it’s much easier to find dairy-free versions of popular ingredients on the supermarket shelves, and this puts so many dessert options back on the menu! Thanks to plant-based spread (instead of butter) you can make our fruity Vegan Blackberry and Apple Crumble at home.

It’s total comfort food, with a crunchy oat topping that balances out the sweet, juicy filling. Serve it hot or cold, on its own or with a swirl of vegan-friendly cream or custard. 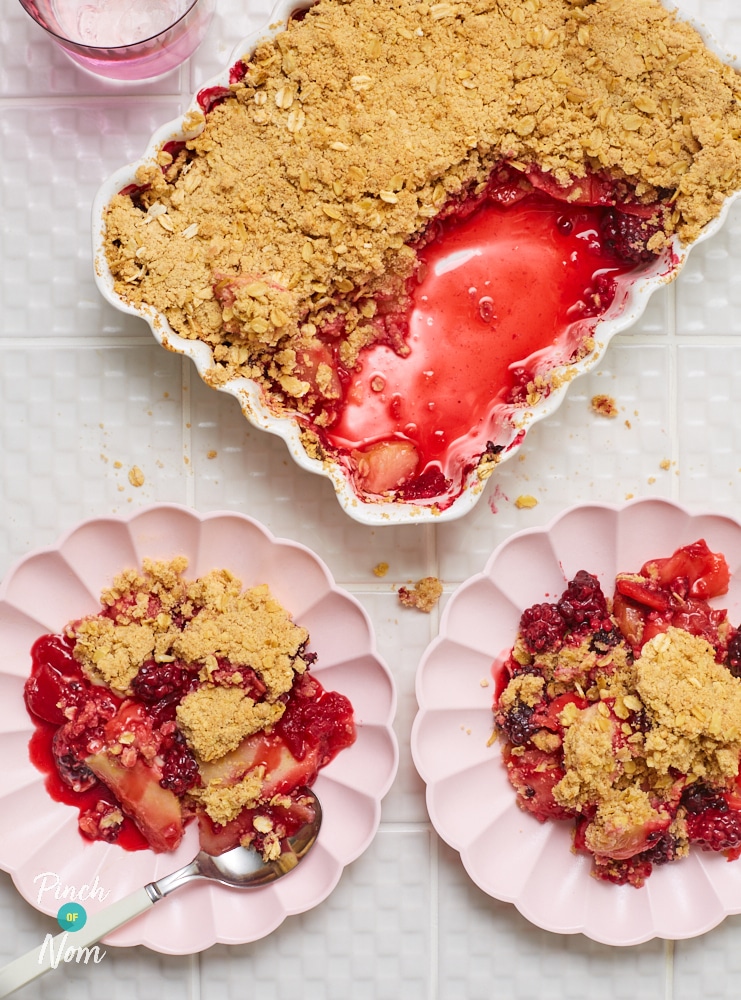 Rice pudding is such a nostalgic treat that makes us think of school dinner puddings (in a good way!). We’ve not only given this classic a vegan twist, we’ve added the grown-up, aromatic flavour of chai tea too. This Chai Rice Pudding is sweet, creamy and a dreamy end to any meal.

Using unsweetened almond milk helps to give this vegan pudding the perfect consistency, with the added benefit of being much lower in calories than full fat milk or cream. Get the spoons ready – you’ll want to tuck into this as soon as it’s ready. 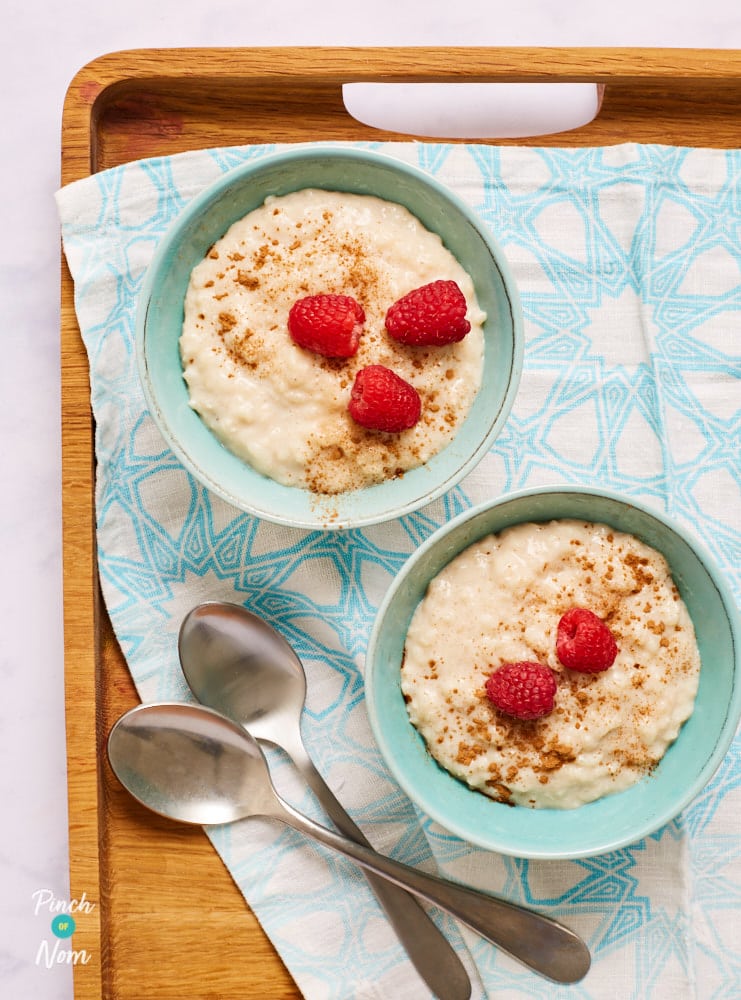 What are your favourite slimming-friendly vegan recipes?

Let us know over in our Facebook group! It’s the place to be for a friendly chat, recipe ideas and slimming motivation.

Plus, don’t forget you can always scroll through the Pinch of Nom Gallery if you’re looking for ideas of what to make next! You’ll find loads of amazing photos shared by our lovely community, so you can see what everyone else has been making lately!

Your Slimming Essentials – The Weekly Pinch of Shopping 22.07

Your Slimming Essentials – The Weekly Pinch of Shopping 22.07

How to Sterilize Canning Jars

How to Build Your Perfect Paloma